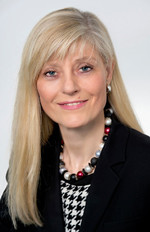 Dr. Manuela Zweimueller is Head of the Policy Department. She is responsible for EIOPA's regulatory and policy tasks in the fields of insurance, pensions and external relations. Previously, Ms Zweimueller coordinated the External Relations Team at EIOPA for two years. Prior to EIOPA, Ms Zweimueller was a member of Senior Management at Munich RE. In her last task until July 2011 she led the implementation of Solvency II at ERGO International and set up a Risk Management Hub in London for Munich RE. From 2008 to 2010, she was the Managing Director of Munich RE's branch office in France. Ms Zweimueller has extensive work experience in the (re)insurance business and particularly in risk management, and served in several positions at Munich RE and Allianz, also in Paris, London and Sydney. Since 2013​​​, she is regularly​ nominated to the Financial News FN100 Women in Finance list, depicting the most influential female executives working in European financial markets. Ms Zweimueller holds a PhD in biochemistry and a Certificate in Economics for Scientists by the University of Hagen (Germany).